Have you ever heard the saying: “There is no such thing as an original idea?”

Like many things that live in the public imagination, it is there because there is some truth behind it. There are some ideas that come like a bolt of lightning out of the blue, or so they seem. But when you look closer at the facts, the ideas have been stimulated by other factors and inputs.

A great example of this is in watching the evolution of the earth and how totally separate cultures, closed off from each other, have developed similar inventions over time.

The best ideas have a bit of something else in them, but how can you capitalise on this and use it to develop a great business idea?

Beware of the costs of being on the cutting edge

Time and distance are a really good place to start when looking for ideas. Let’s start with time.

I have seen and worked on ideas at the cutting edge. The problem with this is that you have to educate the market on how your idea works and then try to sell it.

So when looking to start a business, rather than being on the cutting edge, it is worth being behind it on the leading edge.

Look at the ideas and companies in your space that are starting to get traction. The sort of things that people know what they are and have a budget for them. If you time it right, it is a rising market without too much competition, where you can make a real impact.

The flipside to timing is to look at what has been done before, but did not work because the world was not ready for it. How has technology changed and how have opinions moved on to make this viable.

Advances in technology can turn failed ideas in new successes

The internet and globalisation has allowed a lot of projects that would preciously not have worked to be doable, as have the reduction of cost through things like apps.

Ski tracking kits are a great example of this in action. When a ski tracking device was first conceived it was a hugely expensive piece of kit that no one could afford and needed to live in a backpack to make space for the large battery. Data was downloaded at the end of the week by a person and was very clunky. Unsurprisingly, these limitations meant the idea didn’t take off and the company folded.

But with technological advances with smartphones and apps, ski trackers are born again and available to a massively larger audience to use and enjoy, with a far better interface.

So is there something in the area that you are interested in that was ahead of its time and did not work the first time around? Is it ready to have its time in the sun now? 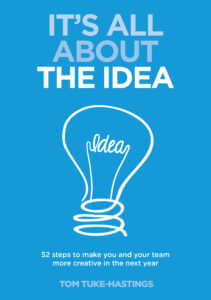 Distance, or location is another really exciting place to go. You see food companies do it all the time. They travel the world to see what the latest trends are and to get something new and exciting.

While we love it, it is obviously not new to the markets where it came from. Vietnamese food is having its zeitgeist moment, which is exciting and very tasty, but who knows what tomorrow will bring?

It is not just food that is different in countries. Their approaches to businesses are very different.

In the UK, we are up against some pretty stiff competition, as we are a creative powerhouse that pumps out ideas. But there are still ideas to be learnt from or even transplanted.

Some companies specialise in taking existing models from one country to another in the hope of being purchased by a big player like Amazon or Google. But there is lots of room for smaller interesting niche businesses.

So look at what is available elsewhere and not just the what, but also the how. How do people run their businesses and what is the industry standard?

This is so important that it has been alleged that certain countries run state sponsored hacking tams to find out how big successful companies run. So stealing operational and logistical standards rather than secret recipes is the new industrial espionage.

Closer to home a great way to get ideas on how to improve how you perform is to look at different industries.

The medical industry has often been criticised for its inability to learn from mistakes. In aviation the mistake is immediately shared and new better ways of working are devised.

This seems obvious as a plane falling out of the sky is catastrophic. But by applying the techniques to medicine, hospitals have had massive improvements. So what other industry does things that you can learn from?

RELATED: The power of the ‘pilot’ – 3 reasons why you should test your business idea before launch

Build your own unique creation by copying the best ideas

The final thing that I am going to recommend is to create a monster. Not a nasty one, but using lots of different parts of different ideas to build what you want in the style of Dr Frankenstein.

You can pluck all the best bits from different times, places and industries and bring them into one perfect project for you. By using a bit of this and a bit of that, you can build something out of the very best bits.

Ensure you start with a really strong core idea that has a market and then bolt on the extra knowledge and ideas from elsewhere to make a real difference in your industry.

This recycling not only allows you to use the best of what is there, but also to recycle parts of what you have come up with before. I am a great believer in keeping file 13 (the bin).

Those ideas that you were going to throw out because they did not work. Look through them again and see what can be used on your new project. There will be lots you can’t use, and bits of others that you want to avoid, but there might be a gem or two that will make the difference.

So keep your eyes open and feel free to build on what is already out there. In the words of Sir Isaac Newton: “If I have seen further it is by standing on the shoulders of giants”

This article has been written exclusively for ByteStart by Tom Tuke-Hastings author of the new book, It’s All About The Idea. The book contains more examples and 52 creative steps to make you and your team more creative in the next year and is available from Amazon priced at £9.99.