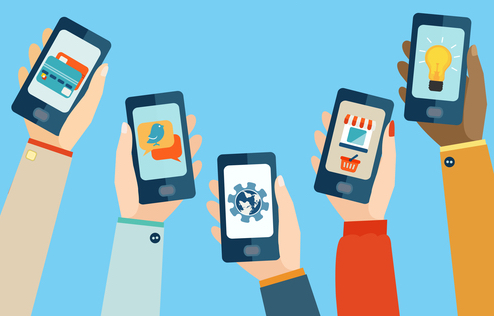 Every year there is a new mobile operating system update, so businesses can be forgiven for not being aware of the vast array of new features that are made available.

In fact, it is usually the case that most users are not engaged enough to uncover the secrets that a new OS has to offer. So to help you benefit from the best new features on iOS 12 and Android Pie, we asked Anthony Main of The Distance to highlight the new features that businesses can take advantage of.

Android Pie is Google’s latest offering to Android users across the globe, with almost all device manufacturers having released the OS since its initial arrival back in August. After several months of being in the market, many of its greatest features have been uncovered, the best of which are shortlisted here.

Apple’s update comes in the form of iOS 12, which arrived during the month of September. Apple enjoy releasing their new operating systems alongside their latest devices, which consisted of the iPhone XS, iPhone XR and iPad Pro. Pushing out the OS at the same time as their flagship devices is no coincidence, as the latest hardware always flourishes with the latest software.

While the release of an operating system can bring about the introduction of brand new features, it also yields an array of improvements to existing features. The following four features fall into the latter category, as they are vast improvements on Apple’s previous offering.

It’s not always the case that Apple users will upgrade to the latest phone, especially due to the high cost of doing so. Many businesses will only upgrade very occasionally, which is why updates to operating systems are so crucial.

iOS 12 brings with it an agreeable boost of speed that will enhance existing iPads and iPhones. App and device launch times have been vastly reduced, and battery life has been extended as a result of augmenting the power saving capabilities. Faster devices will mean more productive staff, as they can react more quickly to client and project demands.

Quickly responding to messages or knowing when to de-prioritise them is a vital part of being efficient in almost all industries.

Good communication is crucial. iOS 12 grants an agreeable boost to productivity by compartmentalising notifications so that users can digest information from a range of apps swiftly. Instead of checking an iPhone lock screen to see an endless list of notifications from a vast array of sources, they are now sorted by app for quick reference.

If a user just wants to check their Slack notifications without sifting through iMessages, they can. If a calendar invite is more important than being tagged in a Facebook comment, it is easier to ignore one and find the other. Grouped notifications is a fantastic time saver, and an excellent organiser.

The days of carrying around dictaphones are becoming a distant memory, especially now that users can transform their devices. Voice Memos is a classic iOS app that allows users to record conferences and lectures for later reference, or even their own verbal notes.

The app has been updated with iOS 12 which brings redesign to improve usability, alongside iPad support. With the inclusion of iCloud syncing, voice memos can be accessed across a user’s devices, ensuring the safe storage of vital data.

Yet another classic Apple app, FaceTime has been available for video calls for years. Its largest drawback has been its inability to support multiple users at the same time, but this has now been addressed.

With iOS 12, Apple has injected a much needed boost to FaceTime’s capabilities, as it can now allow for up to 32 users in one call. It’s a great tool for video conferencing for any users that have access to an iPad, iMac or iPhone.

Almost all Android devices can now take advantage of Android Pie’s great selection of new features. Following on from OS release in August 2018, major manufacturers have had chance to bring the software to their phones.

1. Do Not Disturb Modifications

It’s often the case that when a workload is at its heaviest, a seemingly endless stream of irrelevant notifications arrives unannounced.

Fortunately, Android Pie offers salvation in the form of a refined Do Not Disturb capability. The feature is at its best when utilised in a workplace environment, as users can now whitelist key contacts that they need to respond to, while hiding all others until such a time that they would turn off Do Not Disturb.

Taking a screenshot of a key diagram or handy few paragraphs is a useful tool – having a depository of screenshots on hand is never a bad thing.

With the introduction of Android Pie, gathering screenshots is ever more fluid. Simply hold down the power button and then select the shortcut that appears. Following this, it’s now a basic task to utilise the quick-edit function that enables users to crop the screenshot to the size that they desire.

Extending the life of a device is a benefit for everyone, and in some cases can be the difference between answering a key client call or missing the exchange that will close a deal. Android Pie is able to analyse application usage and allocate power to those apps that are used the most.

Any apps that are rarely or less-frequently used will receive a reduced portion of power, which will ensure longer usage.

Devices used for work should always maintain a high level of security, especially if said devices contain sensitive data. With Android Pie, users can now impose an even higher level of security than before.

A lockdown mode has been implemented which, as the name would suggest, locks down the device. Fingerprint scanning is disabled, and all notifications that would usually appear on the lock screen are hidden. A passcode is required for access instead of biometrics.

In the ever-evolving software landscape, there is always room for adaptation and improvement. iOS 12 and Android Pie bring with them some great new features, but there is always a new solution waiting around the corner. What new features would you like to see that will help your business?

This guide has been written exclusively for ByteStart by Anthony Main, Managing Director of The Distance, an app development company. From disruptive start-ups to global enterprises, including NHS, Bentley Motors, Virgin Trains, PGA Golf, Slimming World, and Astra Zeneca, The Distance supports solutions developed to meet all app based-challenges.