The US Marines are world-famous for their exacting standards and ruthless efficiency. The conditions they operate under might be very different from those we see in the commercial world, but there are very valuable lessons that businesses can learn from the Marines.

Here, James Bowen and Brian MacNeice, authors of Powerhouse – Insider accounts into the world’s greatest high performance organisations – explain what your business can gain by studying the strategies and tactics of the US Marines.

The US Marine Corps is an extraordinary organisation, founded (or in Marine Corps language born) in 1775 before even the foundation of the United States, the Corps has a storied history at the forefront of practically every major conflict in which the country has engaged over more than 240 years.

They are of the 12 institutions examined in detail in our new book Powerhouse – Insider accounts into the world’s best high performance organizations.

Central to the high-performance model of the Corps is the development and enforcement of high standards, and in this article we will elaborate on their definition, measurement and implementation and the lessons of these for business owners with ambition to achieve sustained high performance.

High standards of performance AND effort

Firstly, high standards in the Marines are defined explicitly and unequivocally as being about both performance and effort. Performance is vital, but so also is extracting the most from people’s capabilities and talents.

We witnessed this at first hand at the Marine Corps Recruit Training Camp at Parris Island while watching a group of new recruits on a training run. New to the Corps and at an early stage in their training, the recruits’ fitness levels varied significantly across the group.

Some of the fittest and most athletic ran within themselves but still cruised across the finishing line early, while others had to push themselves to their absolute maximums to beat the time limit for the exercise.

However, the early finishers, rather than getting praised for their times, got a series of menial tasks to do at pace while waiting for their colleagues to finish the run. 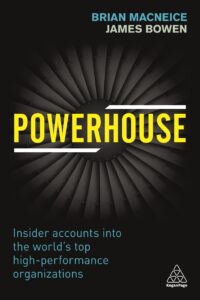 No individual success without team success

Within the Marine Corps, and very obviously within Marine Corps training, there is no individual success without team success, and training exercises at Parris Island are deliberately set up such that the clock stops or the count finishes when the last person in the group completes the task.

Thirdly high standards in the Marine Corps are inherently cultural. Standards are not just what Marines do, it’s who they are.

This overt cultural association of the Marines with high standards is important not just for high performance in combat situations, but for winning in the first place in the war for talent.

Marketing and recruitment messages developed by the Marines emphasize the Corps’ association with high standards and the effect is literally magnetic – individuals who want and feel they will thrive in such an environment are attracted and drawn in, while those who feel that environment is not for them are repelled and self-select out.

All of the above are relevant and interesting for business owners to think about. However, we think that the biggest insight is that the Marine Corps’ culture of high standards arises by conscious design rather than by accident.

Rather than thinking of culture as an amorphous ‘thing’ that is inherited and inflexible, Marine Corps leaders think of it as the dynamic, evolving outcome of strategies and practices that they proactively manage. We discussed above the Corps’ communications strategies with respect to high standards and the impact of these on both people and performance.

We would highlight three further mechanisms by which high standards are achieved and maintained within the Corps, namely Practice, Performance Management and Role Modelling.

Starting with practice. High standards are ingrained in Marines through practice – regular, repeated, and often relentless repetition, with a particular focus on basic skills of military combat and survival.

The intent is to make high standards automatic and instinctive so that they can be relied upon by individuals and their colleagues in the most intense situations.

Situations of intense pressure are part and parcel of life in many small businesses, such that leaders should identify those aspects of the business’ response to pressure that can be defined and practiced such that the organization develops unconscious competence in key areas.

Next to performance management. High standards are reflected in how performance is managed in the Corps – for better and perhaps more importantly for worse.

The training run story outlined earlier is a simple example of Marine Corps performance management in practice, and this pattern of immediate, direct feedback – both positive and negative – is a constant for recruits as they progress through basic training.

More broadly, expectations for individual and collective performance in the Corps are always clear, at all levels all the time, and debriefs on actual performance versus those expectations that get right to the heart of cause and effect are embedded as standard practice.

The speed, rigour and effectiveness of the feedback process itself reinforces standards, and improving the consistency and quality of these processes – in particular to deal better with instances where the Corps has failed – is a major ongoing focus of leadership effort.

Finally, role modelling. If Marine Corps recruits want to see high standards in action, all they have to do is look around.

Drill Instructors and Officers at Parris Island hold themselves to higher standards than the recruits in terms of dress, fitness, skills proficiency and behaviour, and they showcase these standards every day at the base.

Moreover on display throughout the Parris Island base are statues, flags and other icons that provide easy and obvious reference to the importance of standards in the Marine Corps’ history of achievement.

New recruits, to an extent that is different to those in the other US services, are immersed in the history of the Corps through their classroom and practical training – a fact which we might argue has a double impact, on the one hand it reinforces the culture of standards while on the other it subtly raises the bar as yesterday’s heroism evolves to become tomorrow’s norm.

Leading by example is as real, relevant and effective in business as it is in the military, and the nature of small businesses is that their leaders tend to operate close to the action.

Business owners and leaders need to recognise this reality and calibrate their own performance and actions – for better and for worse – in this regard.

Also the Marines example makes clear the cultural impact of setting up the physical environment to reinforce high standards in ways that are explicit and authentic. This is an area of high performance model design that is, in our view, underappreciated such that business leaders often miss a trick.

In summary, high standards are integral to the US Marine Corps as a high-performance institution because of how they are defined, measured and are ingrained in its culture. That reality, however, arises as an outcome of conscious choices the organization has made with regard to how it sets itself up, operates and communicates.

The moral of this story for business owners and entrepreneurs is clear. High performance is institutional and its source is inherently organisational. It happens by design, and is managed. Rather than, as the old cliché suggests, culture eating strategy for breakfast, culture (and by extension high performance) is strategy.

ByteStart is packed with help and tips on all aspects of starting and running a business. Check out some of our most popular guides;

Getting the best out of yourself