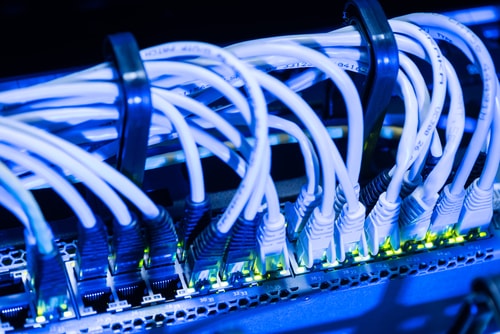 Having a data network has become a requirement for all modern businesses, regardless of size.

An IT network gives your workforce access to the internet and other services like VoIP, allowing employees to communicate and share files with clients, customers and each other.

If a network malfunctions, it can even temporarily shut down your business’s operations, causing significant financial losses. Small businesses often use a Local Area Network (LAN), which means a group of interconnected computers and other devices located within the same area, usually inside the same building.

Evaluating What Your Business Needs

Because there’s no one one size fits all IT network solution, you have to analyse your business’s needs before building the network and investing in hardware and cabling. Some factors to consider are the number and type of devices you’ll be connecting, along with the size and layout of your office.

On the digital side, what files will employees be sharing, and which applications will they run? Will you be implementing levels of access?

It’s also important to consider future expansion, since the network will have to grow as the number of computers increases. You may not need superfast connection speeds now, but what about in five years time?

Because of convenience and ease of installation, wireless networks have become an essential for offices. Employees can have internet access as long as they’re within the area covered by the network and even connect devices such as smartphones and tablets.

However, wireless networks are significantly less secure, and data is more vulnerable to outside attacks. They’re also slower and more erratic, with performance dropping if too many devices are connected.

For this reason, most offices still opt to install wired networks alongside these. The first benefit is faster speed, which becomes apparent when you download large files such as detailed engineering diagrams or video clips. In addition, it’s much harder to hack a wired network from outside.

Having both a wired and a wireless network works well since this provides convenience along with security and speed.

When building an IT network, make sure that you select high-quality components, which will consist of the following:

An IT network has at least one server, which is a primary computer in the network that stores data and sends these between computers. Instead of keeping the data in several computers, storing it in the server is more secure, and you can better control who has access to it.

Servers are either on-site or in the cloud. On-site servers give you direct control over your data, while cloud servers outsources the technical responsibility.

Both wired and wireless networks rely on cables. Even with wireless networks, the access point is connected to the overall network through cables. These are the two kinds of cables used for the network backbone:

Twisted pair cables, which are made of copper wire, are the traditional choice. These look the same, but copper cabling standards give rise to several categories, from Cat3, Cat4, and so on up to Cat8. Each is an upgrade of the previous, with higher categories having faster speeds and frequencies.

As one of the oldest materials for cables, copper remains cheap and accessible, but it’s not the fastest at transmitting data. Data can also be distorted by electromagnetic interference, such as from heavy machinery or motor controls.

Fibre optic cables are made of small strands of glass that transmit data as beams of light. Future-forward and easy to run, they’re very appealing because of their unmatched fast data speed as well as their durability even amidst rougher environments.

While copper still has dominance because it’s been around for so long, the general consensus is that fibre optic has more benefits than copper. Because of this, many businesses are now making the switch from twisted pairs to fibre optic in order to future-proof their network, especially since fibre optic is increasingly becoming cheaper.

Switches and routers are a network’s building blocks, providing connectivity to several devices.

Switches act as a centralised point that connects all devices, including computers and servers, with each other. Before data can pass from one computer to the server, it has to go through a switch first.

Most small businesses often go for an unmanaged switch, which can be installed right away without basic configurations.

Routers link two networks together to produce a shared connection. Aside from forming a cohesive intranet for your business, routers also connect the devices in your network to the internet. They’re smarter than switches and are capable of protecting your network from cyber threats and prioritising devices when resources are limited.

A Network to Grow with Your Business

Your small business’s IT network will be there for the long haul, so you want to set a solid foundation right from the start. Components should be reliable, secure, and easy to manage and install, with minimal downtime.

Since your network will be evolving along with your business, it should adapt well to new features such as integrated messaging and Voice over Internet Protocol (VoIP).

Although it’s rarely ever in the spotlight, your network lies right at the heart of your business, and getting it right is crucial to your ongoing success.

This guide has been written exclusively for ByteStart by James Nash, director of Bristol-based data networking company, TVNET. You can connect with them on Facebook, Twitter and LinkedIn.