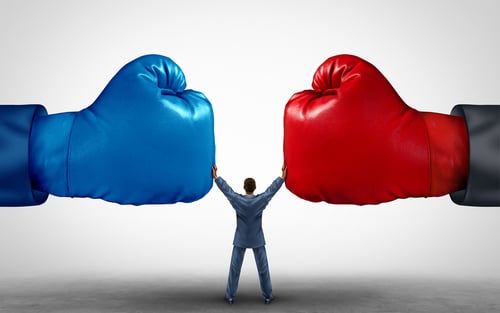 If you run a business it’s inevitable that disputes will arise. Whether it’s problems with suppliers failing to meet their obligations, employee issues or non-payment by customers, when a dispute arises it can be difficult knowing how best to resolve the problem with the minimum of disruption, time and expense.

Taking the matter to court to resolve is costly and takes a long time, so we asked Tim Bennett of Fairlead Mediation to explain how businesses can use mediation to resolve disputes more effectively.

People often think that initiating court proceedings is the only option in commercial disputes. Deterred from taking action by the hassle and cost involved, many disputes go unresolved or are escalated by going to court when there is another, simpler way to resolve disputes in the form of mediation.

So, how does the mediation process work for businesses and what are the advantages over taking a dispute to court?

The 2018 survey by the Centre for Effective Dispute Resolution (CEDR) found that mediation has a settlement rate of 89%, with settlement reached on the same day as mediation taking place in almost three quarters (74%) of all cases.

Going to court is rarely a quick fix. The court process is often destructive in terms of personal relationships and can often cause cash flow issues for a business. In the courtroom it is a judge who decides the outcome.

With commercial mediation both parties agree to the appointment of an independent third-party mediator who facilitates the settlement of a dispute rather than making a judgement.

One of the reasons why mediation can be a more effective solution than going to court is the facilitative nature of the process. The aim is to find a solution that is acceptable to both parties. This is particularly important where there is likely to be an ongoing relationship e.g. between employer and employee or supplier and customer.

It’s also important to be aware that court rules state that issuing court proceedings should be regarded as a last resort.

Where possible parties should try to resolve their disputes by alternative dispute resolution (ADR) and an unreasonable refusal to engage in ADR can lead to a party being penalised in terms of costs in any subsequent court proceedings. Mediation is recognised as a leading method of ADR.

How does mediation work?

A mediator will usually be appointed by your solicitor. As a neutral third party, they will act in a facilitative role. In my opinion, relevant experience is key to a successful outcome, and I would always advise choosing a mediator who is accredited by a leading mediator training and accreditation provider such as the Central for Effective Dispute Resolution (CEDR). It’s also helpful if your mediator has experience of the type of dispute involved.

Once a date for mediation has been set, the solicitors acting for both parties provide the mediator with an overview of the dispute. They also agree issues such as time allocations and how information will be provided and structured.

The better the preparation, the smoother the process is likely to be. So, before attending a mediation session you should consider the following factors:

It is also helpful to provide the mediator with information such as details of any previous negotiations, witness statements and the costs associated with the dispute. If there are confidential documents that you want the mediator to see, then these should be sent to the mediator separately.

On the day of mediation

You can attend mediation alone, with other relevant parties or with legal representation. If you don’t have a solicitor in attendance, it’s a good idea to have agreed access to them in advance so you can contact them should you require advice. It is essential that the parties who attend the mediation have authority to settle the dispute.

The mediation process often consists of an opening meeting with all parties at which the mediator will introduce the process, including addressing issues around confidentiality. Each party can then present the key points in their side of the dispute.

The two parties then go into different rooms while the mediator goes between them running exploratory sessions in which they aim to understand the facts of the case and each party’s version of events and facts. After this, the mediator will discuss settlement options with the parties and will work with them to help reach a settlement.

A major benefit of the mediation process is the potential for reaching a settlement that is more acceptable to both parties than in a court case where there is a winner and a loser; plus mediation almost always costs significantly less than going to court.

Of course, not every dispute can be settled by mediation, but with all the advantages that the process has, it’s hard to see why most businesses facing a dispute wouldn’t seek mediation as the simplest, most appropriate and logical solution.

This guide has been written exclusively for ByteStart by Tim Bennett, a commercial mediator accredited by the Central for Effective Dispute Resolution (CEDR), and a practising solicitor working exclusively in civil and commercial dispute resolution since 2000. He heads up Fairlead Mediation who offer mediation services to clients operating in a range of industries.