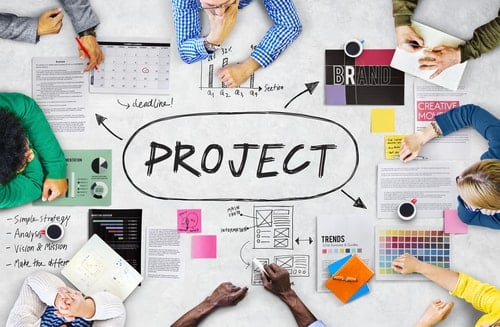 One of the key attributes of projects is that they are not structured in the same way as ordinary business departments. A number of people, possibly including contractors or consultants, are brought together to deliver a project.

This lack of a corporate structure leads to a need for clearly defined roles in the project structure.

If roles and responsibilities aren’t clearly delineated, the result can be gaps, where no one assumes responsibility for an activity, or disputes over boundaries, where several team members are trying to take over the same function.

That’s why structured project methods like PRINCE2 make a point of defining project roles and the areas of responsibility attached to them. It’s hard to assign tasks or work packages in a meaningful way without an agreed schedule of responsibilities.

However, this is one of the sticking points for many smaller businesses. They don’t have enough people to assign one role to each person. In addition, many businesses feel that they are agile and smart because they’re small and are suspicious of any imposed structure that might detract from these advantages.

They needn’t worry. In recent years, the PRINCE2 project management methodology has consciously emphasised the ways in which smaller project teams and businesses can take advantage of the clarity of defined roles, without losing the flexibility intrinsic in small project teams. Some roles can be combined and PRINCE2 is explicit about the roles that need to be kept separate and why this is.

Smaller businesses don’t have the luxury of inventing everything from the ground up. A project manager in a small or medium sized business (SME) doesn’t have time to develop a set of roles and responsibilities, get them reviewed, issue a final version and then assign them to team members. So the good news is that this work has already been done.

At first sight, the PRINCE2 roles look far too elaborate for a smaller business. But one of the key skills of a PRINCE2 project manager is the ability to the scale the method up or down to suit the particular project they are managing. What’s more, many of the roles can be combined.

The ones that can’t be merged are fairly self-explanatory. Obviously, since the Project Manager answers to the Project Board, you can’t do away with the Board and merge it with the PM. That would leave the PM without any supervision except for the sponsor.

Let’s look at what the PRINCE2 roles have to do, for further clarity on how they work. The roles are gathered into four project levels;

This is the top of the governance hierarchy and it includes the project’s sponsors. In a smaller business without numerous specialised managers, running small projects, this may be one person – the business owner.

It’s the level at which the project’s key strategic goals (its mandate) are set and its budget and time tolerances are defined.

This is where the decisions are made. The board needs a user or customer who can comment on whether the project is delivering as intended. The board checks to ensure that the project has sufficient resources to carry out its mandate and will let the sponsor know if the project is not delivering, or doesn’t have enough resources.

The PM is the individual who has to produce exception reports when the project’s anticipated spend or duration looks likely to breach its tolerances, set in the mandate. Another key responsibility is highlight reports for board meetings.

In a smaller organisation, the team may be delivering the project as well as doing all or part of their normal jobs. This doesn’t stop them functioning effectively as a team if they are all clear about their project responsibilities and understand how their role fits with the others on the project team.

This is a quicker and more efficient process than the project manager being tasked with designing a project structure from scratch. It’s just one of the ways in which a structured project methodology can contribute to more agile project management.

This guide has been written exclusively for ByteStart by David Baker, Marketing Manager at PRINCE2 Training, who provide courses and certification in PRINCE2, Agile, Lean Six Sigma, ITIL, PMP, and Scrum project management methodologies. You can connect with David and PRINCE2 Training on Twitter, Facebook and LinkedIn.

ByteStart is packed with help and tips on all aspects of leading and growing your own business. Some of our most popular guides include;