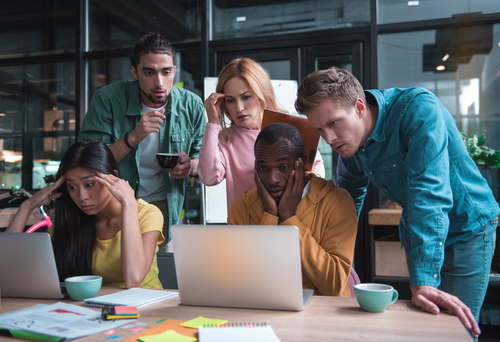 In a small business or start-up culture there is often limited time available for formal employee appraisals or structured feedback planning. However, developing a business culture where structured feedback is routinely given, received and acknowledged is essential for long-term growth.

Your staff may be good but sometimes their work can fall a little short of the standards you need. On occasions, though, the work can be bad, really bad, to the point of being detrimental to the business. Let’s look at the problem of dealing with this and steps you can take to make feedback into a powerful business tool for you.

When something goes badly wrong, it’s possible for a business owner to lose perspective and say and do things they might later regret, but nobody comes into work to do an awful job. Most people do the best work they can, most of the time. Sometimes things just go wrong.

When you’re overloaded, making time to carry out a performance review with a colleague that has under-delivered can be a chore. Knowing that when the conversation is over they will sit back at their desk just a few feet from yours doesn’t add any incentive for a tough conversation either.

But letting shoddy work go without a conversation can create a culture of mediocracy, so immediate feedback is vital.

How to handle the feedback meeting

Fortunately work is rarely all bad, so a leader will have a few nuggets of positive feedback by which to sandwich the recommendations in.

The sandwich feedback technique is as old as time, but still useful to business owners whereby they can insert the critique between generous helpings of praise and appreciation. This naturally makes a person more amenable to accepting tips on what to do differently.

Sometimes, however, there’s no meat to go between the slices of bread. As a leader who’s been there before I can tell you with conviction that when there’s nothing positive to say, it’s not a pleasant meeting to call.

However, there are several key practices that make these meetings productive for both parties. Practices that can soften the blow for the person receiving the feedback whilst making sure that the message sticks.

Here’s the playbook for running these feedback meetings;

1. Give yourself time to control your emotions

Terrible work can make you despair, or angry, or irritated. None of these feelings are conducive to a healthy conversation, and in this situation, you cannot depend on the other person to maintain composure for both of you.

So take a deep breath, relax, make you are in a calm and collected state of mind before you even think of starting a conversation.

Yes, giving largely negative feedback is not something to look forward to. No, delaying it will not make it any better. It’s very human to procrastinate on such tasks, but the sooner you do it, the stronger your case is likely to be.

Time has a way of smoothing out the rough edges in people’s memories, so delaying such unpleasant interactions is likely to make the recipient feel they did a better job than they actually did. Bottom line, get the job done before time causes the impact of it to fade away.

It’s tempting to shoot off an email and be done with it. That way, you can pour all the unpleasant truths into the mail and not have to deal with the consequences.

But what is good for you is terrible for the person in the receiving end, who, in addition to being upset and defensive, now probably has a number of questions but isn’t sure if you would welcome them or not. Emails are already bad at conveying positive emotions, so an email of negative feedback is that much worse.

While there are various schools of thought on this, I truly believe when the work is really bad, it makes no sense to chew the person out in front of their peers and make it an exercise in humiliation.

Doing it in private allows the recipient to open up a little more, and thus, be more receptive. Ideally take this conversation off-site, so it’s away from other colleagues and doesn’t create negative energy in your office.

5. Make a checklist to avoid venting

I’ve been guilty of this before. Instead of discussing the problem, I have slipped into a “feedback loop” where I have gone on at length, attacking the work from various angles but basically saying nothing new and original. Making a small checklist of talking points before the session helps keep me on point and on track.

6. Identify the root cause

Why do people make mistakes? Especially catastrophic mistakes that make such feedback sessions necessary? In my opinion, it can be boiled down to two things:

a) People care too much i.e. they whip themselves into a frenzy, and thus miss important details,

b) They don’t care at all and can’t be bothered to do a good job.

In case of the former, it is important to address their work process and coach them to manage stress and deadlines equally well, while with the latter group, it is the attitude itself that needs to be addressed first.

7. Give the recipient a chance to speak

Continuing from the point above, once you are done laying out the basic issues and observations, it is best to let the other person speak.

They are probably feeling quite defensive at this point, so it is helpful to have them take control of the narrative for the moment and provide their side of it. It makes them feel that you are there not just to criticise, but also listen, and makes a lot of difference on how feedback is perceived.

8. Discuss the work, not the individual

Keep the conversation and feedback focused on the particular task you are critiquing. This helps avoid anything that might be perceived as a personal attack.

The person is probably already feeling a little defensive – commenting on anything else, especially not directly related to the work is going to make them even more so.

From the perspective of the recipient, few things are more infuriating than vague feedback. Try to avoid phrases like “this was pretty awful” and “your work was not good enough”.

Discuss the work done, and point to specific issues that went wrong. Then, discuss how those issues can be resolved. Without a discussion on what can be changed to improve the quality of the work, it is unlikely to be a productive discussion.

10. Establish a plan to move forward

One of the biggest mistakes I used to make with regard to feedback was not deciding on a plan and a calendar for follow-up.

Whether it’s a rework of the original task, or specific measures the recipient should be taking to improve performance – always ensure that the person knows what to do and has some level of accountability after the review.

11. End with a message of encouragement

Normally, I always end reviews with positive feedback – something the person did right. However, when it comes to truly irredeemable work, that is difficult, and can come off as insincere. In such moments, it is better to end with a statement reaffirming your faith that the person will be able to leave the poor performance behind and move forward.

If possible, reference some past successful project to add heft to your encouragement. However, try to ensure the person leaves the review hopeful, and not defeated

Why honest feedback is essential

Reviewing performance and giving feedback is, in many ways, a bigger responsibility than we realise. In small businesses relationships can be close but feedback is still essential and needs to be given in a way that maintains healthy working relationships.

People also aspire to move up the ladder as the business grows and as your “junior” they are more likely to be vulnerable, more susceptible to harsh words, and more confused by vague and unclear critique than we would be.

In such situations, it’s crucial we empathise with the person and their situation, and deliver bad news in a manner and language that helps them overcome what is hopefully a temporary setback, and helps them continue to grow with the business.

This article has been written exclusively for ByteStart by Richard Foster-Fletcher, a member of Toastmasters International, a not-for-profit organisation that teaches communication and leadership skills through a worldwide network of clubs. With 400 clubs and 10,000 members in the UK and Ireland, you can find your local club at Toastmasters.org

ByteStart is packed with help and tips on all aspects of running your business. Check out some of our most popular guides;